No other flower has seduced man to such an extent than the exotic enchantment of the tulip. Its journey has been a romantic one. From the inhospitable mountains of central Asia this tiny bulb was carried along the trade routes into Turkey to become the emblem of the ruling house of Osman. So beguiled was the Sultan Ahmed III that he spent his fortune decorating Topkapi Palace with thousands of tulips, holding parties where these prized flowers were lit by flickering candlelight and reflected in shimmering mirrors, while guests were required to dress in clothes that matched the tulips.

A century earlier Tulipmania (1634 - 1637) had gripped the citizens of Holland. Canal houses had to be sold as merchants bet their entire wealth on the prospects of a handful of tulip bulbs. Smoky backrooms of local taverns became dens of tulip dealing, until in February 1637 the market crashed, causing financial catastrophe for many.

This year at The Land Gardeners we are indulging our passion for stripes. We have fallen for the frivolous, scarlet splashed blooms of the parrot tulip Estella Rijnveld. 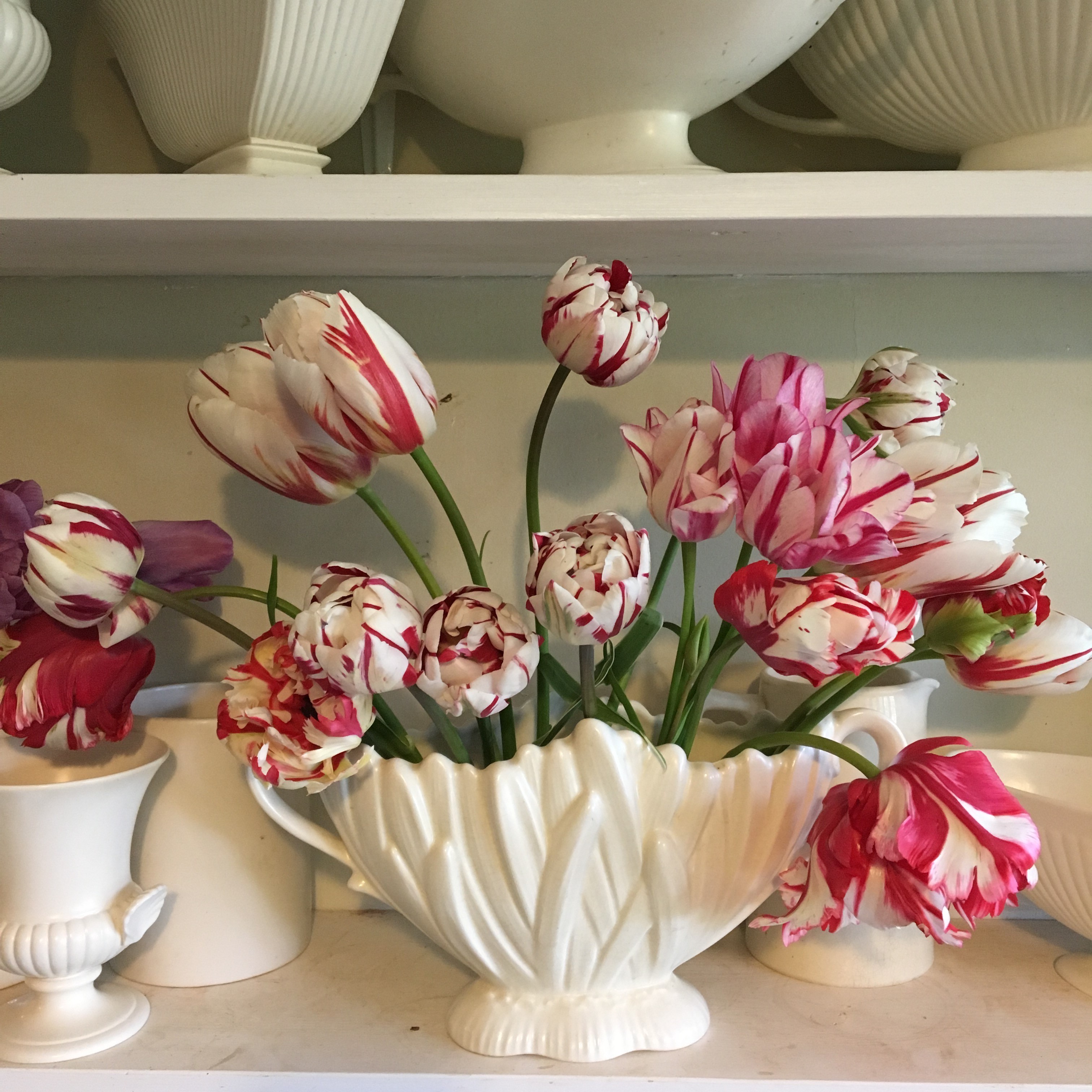 No statuesque in the garden but a seductress when cut. Shown about is also Carnival de Nice. We love Carnival de Nice, which we plant beneath espaliered fruit trees, its raspberry ripple frills unruffle just as the apple comes into blossom. 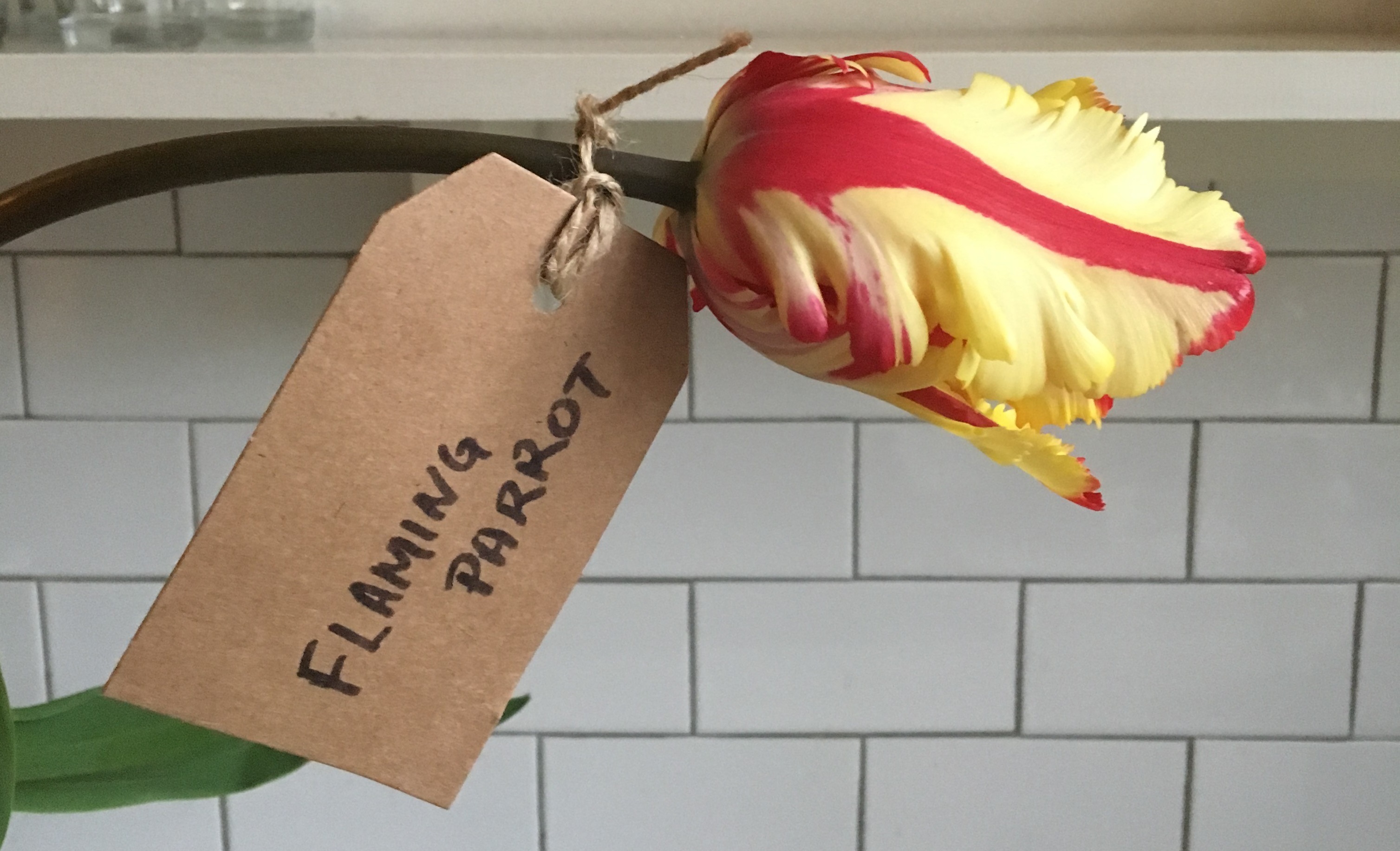 And for a late flowering tulip, Tulip Flaming Parrot is a fun and jazzy addition to the garden. 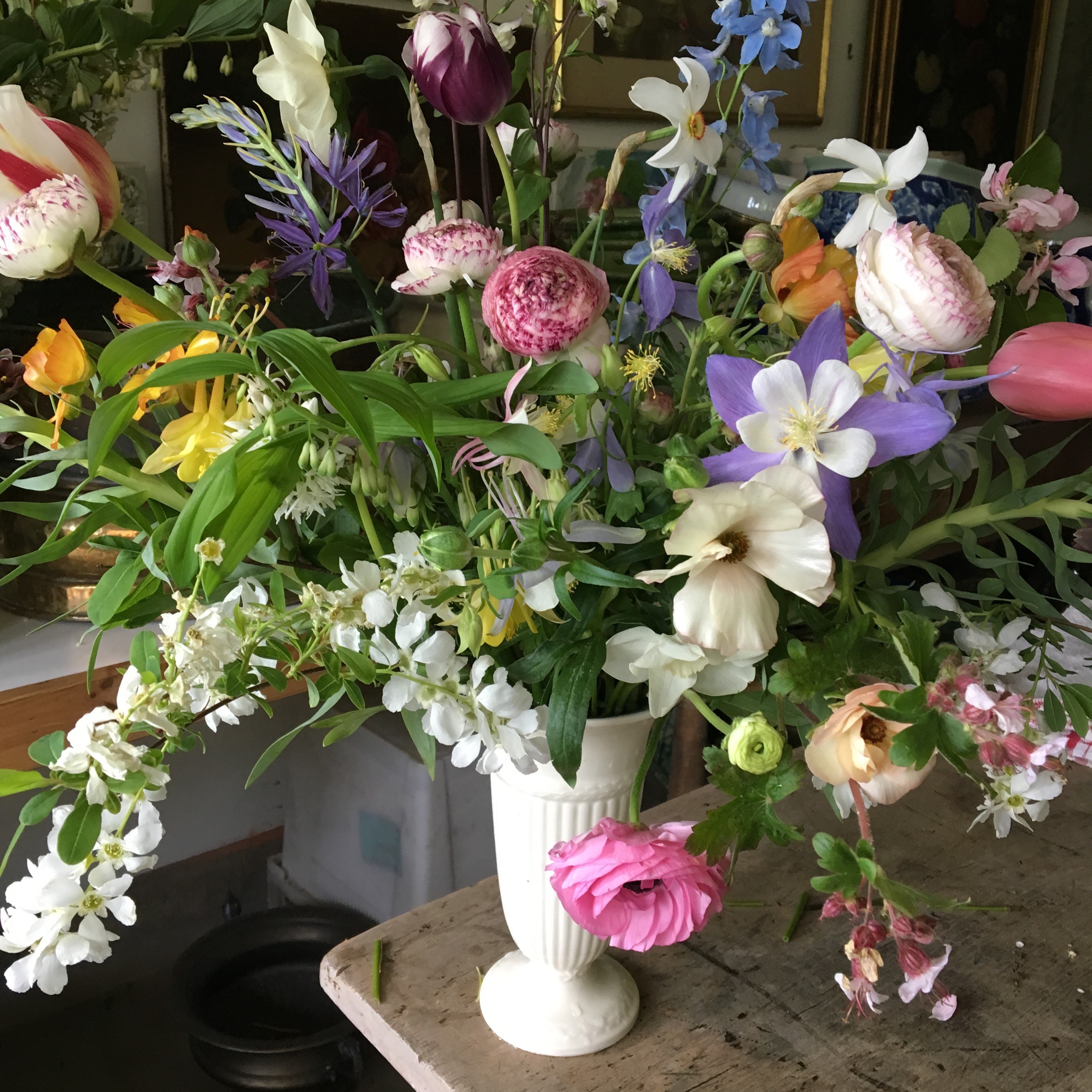 Inspired by Dutch seventeenth century paintings, we mix striped tulips with armfuls of blossom, camellias and other spring flowers. 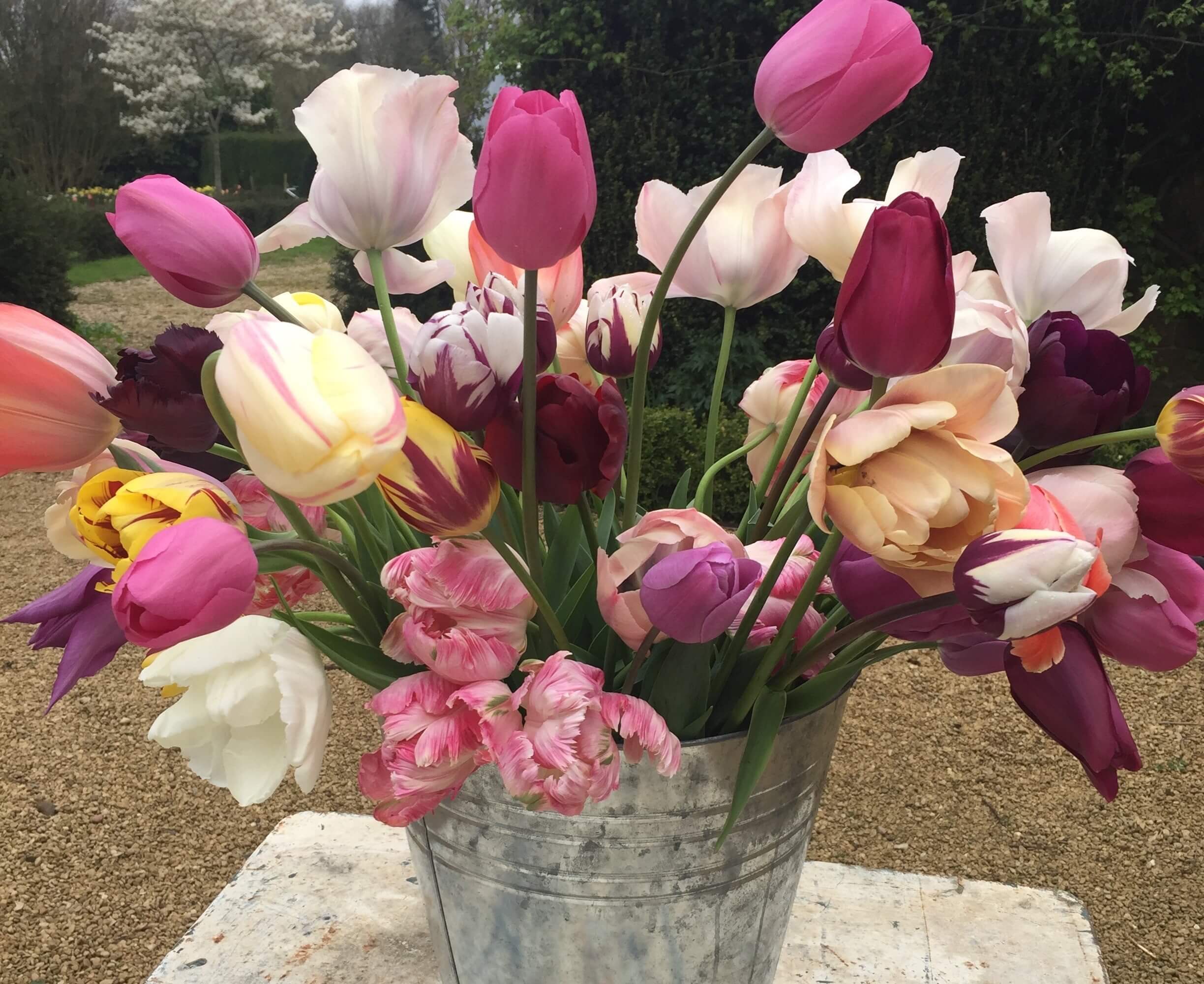 And for a long lasting tulip choose the dusky pink double-flowered peony tulip Belle Epoque which flowers on and on.

November is the best time to plant tulips so you still have time to order them and pop them in the ground before Christmas. At The Land Gardeners, we plant them in trenches 25-30cm deem covered with a base of 5cm of sand to help drainage. Whilst it is generally thought that the bulbs should sit a few centimetres apart from each other, we often tuck out tulip bulbs in the trench so they are almost touching. We cover the soil and wait for spring.

When you come pick them, if you pull them from the base rather than cutting them you will find you have the most glorious long stems on your tulips.

If you want earlier blooming and taller bulbs you can plant them in a bed in a glasshouse. Last year the tulips we found that did especially well in the glasshouse were Apricot Pride, Victoria's Secret and Blue Heron. 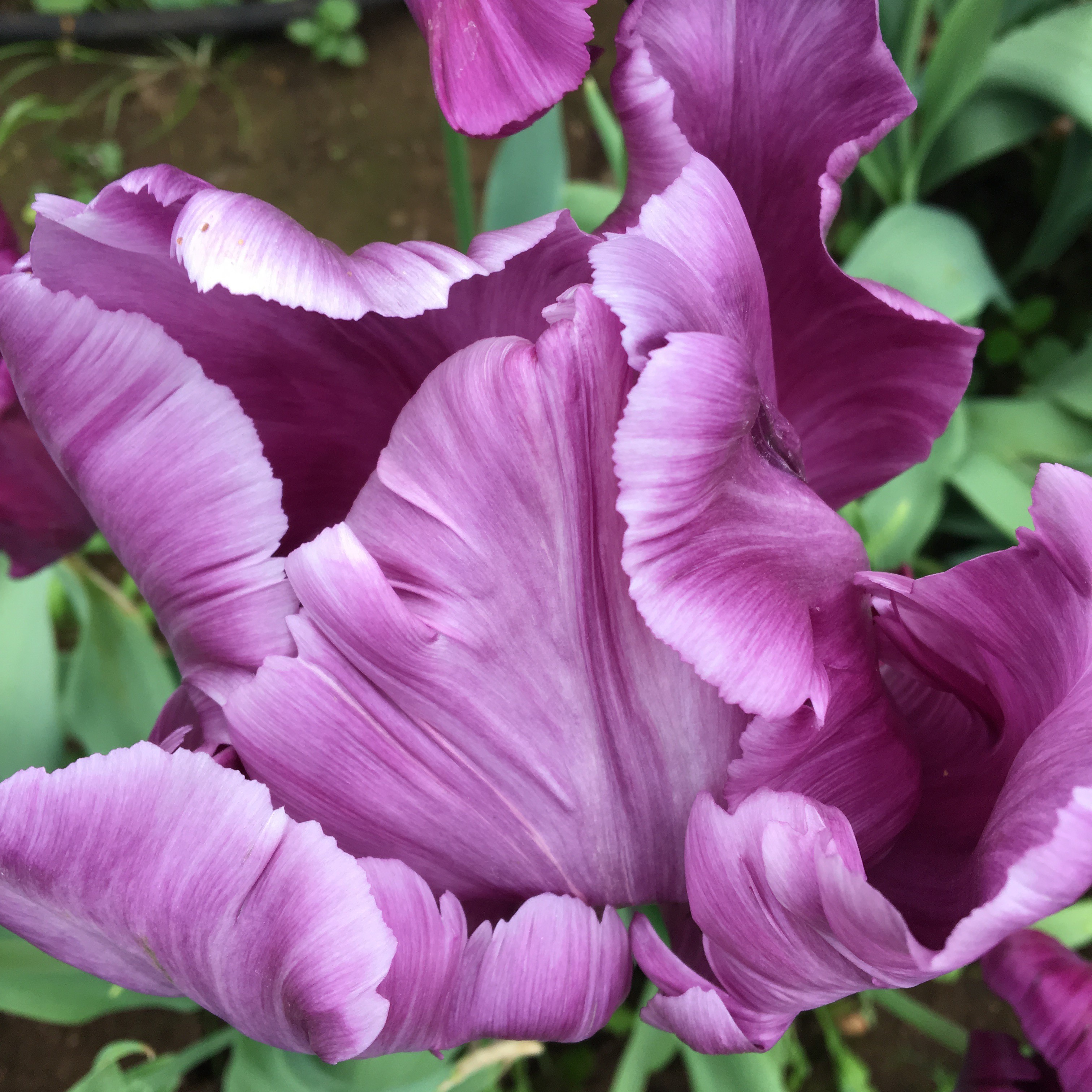 For us tulips herald the beginning of the cut flower season. There is no better way to celebrate spring.

'Tales and Recipes from the Kitchen...