Home > News > What's 'growing' on at The PIG in the Forest

What's 'growing' on at The PIG in the Forest

Visiting The PIG in the Forest is always a pleasure; the smoky scent from the wood burning oven spreads through the air and the flourishing kitchen garden is full to the brim with fruit, vegetables and just about everything else you can imagine. In the heart of their kitchen garden, is an Alitex greenhouse. We caught up with head gardener Alex back in August, to find out what has been growing in this wonderful space. 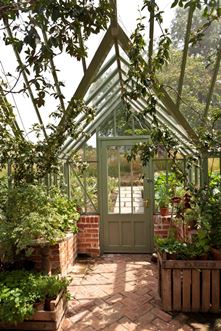 One half of the large bespoke greenhouse contains over 30 different types of chilli, the largest they have ever had at Brockenhurst. The variety was impressive; there were spaghetti chillies hanging like string at 8500 SHU, not very spicy compared to the Katie, which measures over 1.5million SHU. Last year, an apricot chilli plant was in demand, with the apricot chilli soup proving to be a popular dish in the restaurant. It was nice to see that they to had a Kaffir Lime tree in the corner (of a similar size to ours at Torberry Farm), not for the fruit but for the oils that the leafs produce.

Something a little different

As we walked through to the next room, we brushed passed some unusual plants that I was told I just had to taste. Some Mexican Marigolds, which were used to poach with strawberries, had a unique taste whilst some Cola Bottle Pelargoniums, used to infuse deserts, were exactly as you imagined they would taste; it was amazing how something so natural, could taste like it was packed full of E numbers. Some beautiful Begonias had a citrus burst that fizzed away on my tongue and the Salad Burnett had an interesting yet refreshing mix of watermelon and cucumber, which Alex advised was great for garnishing pastries with in the winter. The most unusual edible plant had to be the electric daisy, a natural anaesthetic; after picking off a bit of the yellow centre my tongue was left a little numb for a good 10 minutes! 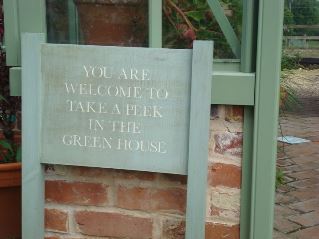 According to Alex, the biggest demand from the kitchen this season has been for courgettes, they have two different types; yellow 'sun stripe' and the common green 'Ambassador' variety. Kales and other mixed greens are always on the menu, so a strong supply is needed. I was intrigued to find out if all of ‘The PIG’ locations grew the same produce, “we do grow a lot of the same stuff” Alex continued, “we have the same chillies, however there is a touch of our favourites mixed among the different gardens as we all have certain things we enjoy growing.”

It seemed that most of the crops were growing well, a pear tree with bottles hanging off of it caught my eye, I was told that the pears were placed in them when small ready to grow and infuse alcohol at a later date, I wondered why I hadn’t already tried this myself. There were a few crops that had struggled this season; outdoor tomatoes were suffering a little because of the lack of sunlight and the germination of parsnips hadn’t been great but the majority of the garden was crammed with edible delights.

I asked Alex how often the menu changes in the restaurant, “It really can change daily depending on the garden stock,” which in my eyes, just adds to the charm and authenticity of this beautiful place. I will be back in November and can't wait to see what they have planned for the Winter.

If you want to see The PIG's beautiful kitchen garden for yourself, visit there website here - we recommend you book on to lunch! Keep up to date with what's growing in their greenhouse by following us on Twitter and Facebook.

Discovering the Greenhouse at The PIG at Bridge...
View more >