A peek inside the director of Kew’s walled garden

Our friends >Your greenhouses >

Last year the director of Kew Gardens, Richard, had an Alitex greenhouse installed in his private walled garden. His home, hidden behind some beautiful trees, is often seen with staff milling around, enjoying a little peace on their lunch break, however the walled garden is under lock and key and is the only place that is private for the director and his family to enjoy. I was lucky enough to spend an hour with Tony the head gardener, to find out what is growing in this quiet family space. 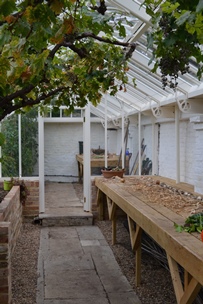 The first thing you notice when you walk through the gate, is the large, white 13m long Alitex greenhouse; in one side there is a large vine and in the other, a set of tomatoes that were planted in January, “Richard loves tomatoes, they are his favourite things to cook with and he has always wanted to grow his own,” Tony commented, “so I am helping him grow some this year.”

The rest of the garden was flourishing; cages were full of cabbages, kale and other members of the brassica family, onions that were planted back in March had grown to a phenomenal size and the chillies were glowing in the sunshine. I asked if the late summer had affected the growth of any crops, “the sweetcorn and pumpkins haven’t been as good as previous years, they seem to like a warmer summer,” Tony continued, “however the potatoes have been growing better than ever, they enjoy a cooler climate.”

It was hard not to notice the long line of strawberries laying in one of the raised beds, “last year we had about 20 strawberries from this whole bed, this year we have had nearly 20 ton!” Tony joked. The rhubarb plants had also produced a good healthy crop, however Tony advised that they shouldn’t really be harvested after July, “the Oxalyc acid in the leaves goes back into the stem mid-summer, if you eat too much it can be harmful.” 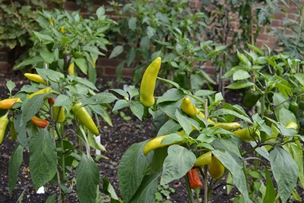 The produce harvested from this garden is enough to feed twelve people all year round, Tony and Richard haven’t bought any fruit or veg since April, “we don’t use it all” Tony stated, “the surplus is shared between the staff, family and friends – we have fantastic BBQ’s!” I was curious as to what Richard’s favourite thing was to cook, Tony replied “I’m not sure exactly what he makes with them, but he loves cooking with tomatoes!”

Tony began to tell me what it was that he enjoys growing, “I like to grow different colour veg; we have the traditional dark purple beetroot here, as well as pink and gold.” It is easy to see that this little corner of the 121 acres of land that makes up Kew, means a lot to the few that use it. The walls around it create a quiet sanctuary; an escape for the director and his family to relax in.

I was lucky enough to come away with a carrier bag full of swiss chard, potatoes, garlic, tomatoes and potatoes. I look forward to visiting again in March to see what new crops are going in for the 2016 summer season. Read the full story behind the directors Alitex greenhouse.